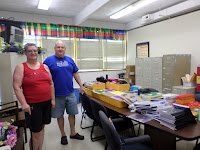 Brenda and Paul Germain dropped off the results of our school supplies drive to a Fayetteville NC STEM school Aug 20, 2018. Thank you to all who donated, we were able to purchase $354.17 of supplies, detailed below. Donations totaled $315.00. 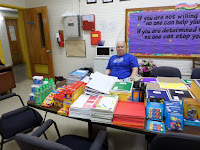 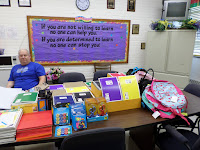 
While they were happy to receive our donation, there was an issue this year. If you notice, there are no school employees in the pictures. Apparently, they have had some blow-back from the community about previous years' pictures in the local newspapers. In fact, we were specifically asked not to even mention the name of the school in our news releases. When pressed, we were told that some of the blow-back had come from school administration. To say we were disappointed is an understatement.
Posted by MASH Ft. Bragg at 11:30 AM No comments: 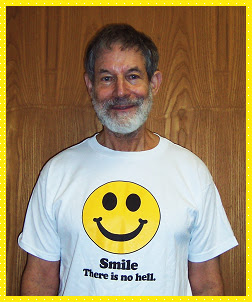 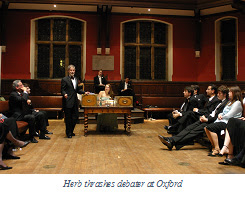 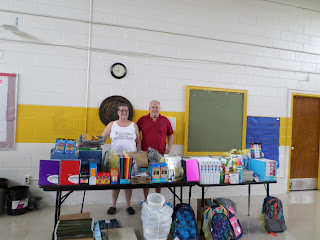 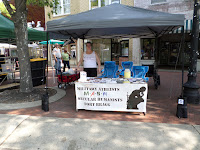 The day after Winter Solstice, Kat, Paul & Brenda Germain dropped off our annual Food Drive donation to the Food Bank of Central and Eastern NC. We exceeded last year's donation by 27 pounds! This year we donated $175 worth of food.  That's 134 pounds, enough for 112 meals. Thank you to everyone who donated time, money or food! Atheists doing good because it is the HUMAN thing to do.

On December 18th we held our annual Solstice Celebration at the Germain residence. Our celebration was an intimate Pastafarian repast complete with homemade spaghetti and garlic bread. This year's Tree of Knowledge featured forbidden fruit for the picking (apple ornaments filled with tasty candy.) Goody bags filled with MASH Ft. Bragg calendars, notepads and more were handed out to everyone and this year's door prizes were MASH mugs and a MASH insulated lunch bag. It was decided to apply for a table at 2017 Dogwood Festival, so our application was sent in. A day filled with lively conversation, laughter and camaraderie.
Posted by MASH Ft. Bragg at 11:08 AM No comments: 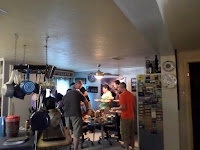 MASH had a busy summer this year. We started the summer off with our annual Memorial Day cookout at the Germain residence. There was a great turnout; Mike, Lance, Roxanne, Kevin, Annee, Mike & Stef, Vicki, Paul & Brenda and John who brought some delicious marinated chicken! 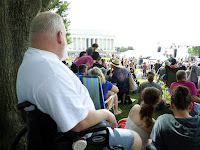 Nine of us from MASH Ft. Bragg were able to make it to the Reason Rally in Washington, DC this year; Mike & Wendy, Cheryl & Baily, Michael & Stef, Paul & Brenda and John. Most of us were able to take in some sightseeing at the Smithsonian and other national museums on the mall. Brenda was finally able to visit the Air & Space Museum! The Reason Rally was a great experience and the weather was stunning. The speakers, including Penn Jillette, Lawrence Krauss, John DeLancie and Bill Nye were fabulous. Mike & Brenda were even able to get their pictures taken with Lawrence Krauss! 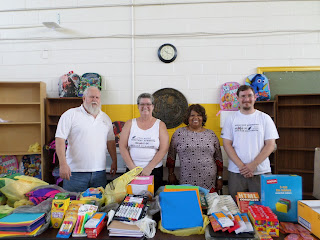 Our 3rd annual School Supplies Drive for Ferguson-Easley Elementary was a great success! On August 23rd, Paul Germain, Michael Berntsen, Brenda Germain and Stef presented Dr. Mary Hales, the principal at Ferguson-Easley, with our donation for 2016. We were able to donate over $450 worth of new school supplies and another over $100 worth of used bookcases, FAX machine, new toner and assorted office supplies. Dr. Hales was thrilled with what we were able to amass this year.

Our donation was especially need this year as Ferguson-Easley  had to pay to repair their A/C unit which had been robbed of it's copper just days before.

A big thank-you to all of our members who gave generously to this worthy cause, educating children in the rational and critical thinking required in science, technology, math, engineering and life. Ferguson-Easley is a STEM school in an economically challenged area, giving their students the discipline and education to improve their futures and ours!